Home
Ladies Special
Poorna's journey to be made into a movie..!

Poorna's journey to be made into a movie..! 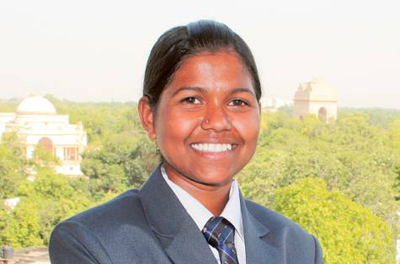 Malavath Poorna who scaled the World's highest peak- Everest, hails from Pakala village, in the district of Nizamabad, Telangana. Scaling the Everest on 25th May 2014, Poorna became the youngest to accomplish this task.

Being chosen from Andhra Pradesh Social Welfare Residential Schools, Poorna was one among the 108 climbers of the Everest. Poorna, on May 25th at 6 a.m stood on the top of the highest peak and with her were some of the things she carried- her school flag, a photograph of Dalit leader Dr. B.R. Ambedkar and the Tricolour in a plastic bag acquired from a fancy store in Secunderabad.

The mountains echoed the pledge she had always memorized: "I am not inferior to anyone, I shall be a leader, I will think big and aim high, I will never give up...".

Poorna had to face a series of hurdles to reach that height. She came across the adverse climate, she had to face the intense weather conditions, she had to sacrifice on her favorite food, she also had to pass by the dead bodies in the snow. At the age of 13, a girl is so strong that she crosses all those barriers and reach the world's tallest peak.

Poorna's journey is not just inspiring, but also provides a path for all the women who underestimate their own potential. To make the world know about Poorna's bravery and commitment, a Bollywood movie is to be made.

Rahul Bose is to direct this movie which is based on the story of Malavath Poorna. The pre-production works are going on, and the movie is to get on to the floors soon after that. Details about who is to play the role of Poorna is yet to be out.

We wish the movie will inspire more and more people, especially women. Poorna is not just a girl, she is an icon to show off the girl power!!