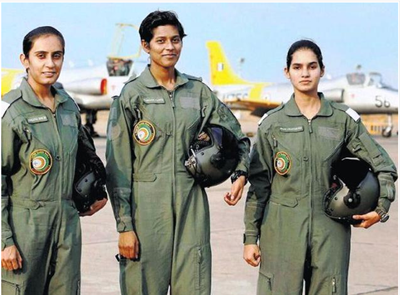 Yet again, these three young ladies have proved that they are in no way inferior on par with anyone. Making their own mark in the history of Indian military, these women are permitted into combat team. This is for the very first time that women are being allowed to endure in combat team.

This is the very first batch of three lady pilots, which is  inducted in Indian Air Force fighter squadron. Going by the names, Avani Chaturvedi, Bhawana Kanth and Mohana Singh were appointed to work in Indian Air Force, as combats on Saturday.

Until last October, women were not allowed to work as combats in Indian Military. But, then the government decided to open the fighter stream for women. The enforcement of this decision was on an experimental basis for five years.

Due to a combination of operational concerns and logistical constraints, the combat roles of women in Army and Navy are yet off limits.

Talking about how it feels to set a new mark in Indian Military, Mohana Singh says, " It was a dream of my parents and grandparents to see me fly. It was for flying, I joined the Indian Air Force".  Mohana's father is with the IAF and grandfather is still serving as a flight gunner in the Aviation Research Centre.

This batch will be given an intense, advanced jet training on Hawks. They need to endeavor and become eligible with 145 hours of on-the-air experience with the Hawks to get into the cockpit of a supersonic fighter.

These ladies have made the whole country proud, by making the impossible thing to happen. We wish there are more of such brave ladies, who join the Indian Military. The inspiration these three of them spread is a thing that is needed to be appreciated. Bows to them.

« Previous post
Poorna's journey to be made into a movie..!
Next post »
Here is how you maintain your silk sarees!