He is Lord of Venkata mountain , son of Vasudeva , Pradhyumna,
The greatly valorous Sankarshana , Anirudha and the Lord of Seshadri hills.

He is one who punishes bad people , one with a lotus on his belly,
One who lives in the Venkata mountain, He is the creator ,
Lord of the universe, Lord of knowledge and one who is dear to his devotees.

He is the chief of cows, Lord of cows, the black one ,
One who gives lustrous body, One with Garuda in his flag,
He is Varaha the boar, Vamana the dwarf ,
And one in whom all souls reside and one who is forever victorious.

He is the one who carries Lakshmi , one with lotus like eyes,
He is Vishnu prayed by all devas,He is the man lion,
He is the great lion and the ancient master of all actions.

He who is Lord of Rama ,husband of earth ,
One who carries earth , greatest among males,
He is son of Chola , is a dear one , he is peaceful,
And he is the giver of boons to Lord Brahma and others.

He who is the treasure of Lakshmi , and one who creates fear
He also destroys fear among all beings, He is Rama,
He is Rama who ensures safety and also one who cuts off the ties with birth

He lives in all beings . lives on a mountain , Lives with Lakshmi
He is the consort of LakshmiHe is one cannot be destroyed,
He is one who does not have limits , who is Vishnu and the Lord of Venkata hills

This is the song of the great glory of Lord Vishnu,
And if this is read by one at dawn, noon and dusk ,
All his sins would not remain.

There will be no fear in the gates of the palace ,
In Fierce war when the enemies are troubling,
And when troubles are caused by ghosts , serpents and devils.

The sonless one will get son, The money less will get money,
The one suffering from disease would get cured,
And the one who is in the prison would be set free.

Whatever one desires most in the world , would without doubt would be fulfilled,
And results like wealth, honour by kings, pleasures , and salvation would be attained.

One will leave the illusory happiness and reach the great Vaikunda, the land of Vishnu,
If one prays the Lord with Lakshmni in the banks of the sacred tank of the God.

Oh God who has a wonderful form giving rise to good,
Oh God who gives all the wealth one desires for,
Oh God who is the Lord of the Venkata hills,
And Oh God in whom Lakshmi lives, let there be good. 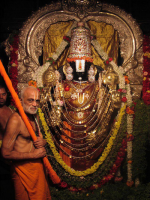