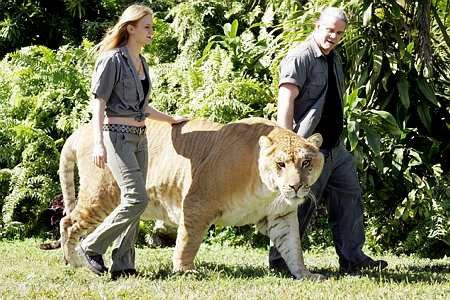 Hello, Know what's a Liger? It's a cross breed of a Lion male and Tiger female… Read on……

The 10ft Liger who's still growing... He looks like something from a prehistoric age or a fantastic creation from Hollywood .

But Hercules is very much living flesh and blood - as he proves every time he opens his gigantic mouth to roar. Part lion, part tiger, he is not just a big cat but a huge one, standing 10ft tall on his back legs.

Called a liger, in reference to his crossbreed parentage, he is the largest of all the cat species.

On a typical day he will devour 20lb of meat, usually beef or chicken, and is capable of eating 100lb at a single setting. At just three years old, Hercules already weighs half a ton.

He is the accidental result of two enormous big cats living close together at the Institute of Greatly Endangewhite and Rare Species, in Miami, Florida, and already dwarfs both his parents.

"Ligers are not something we planned on having," said institute owner Dr Bhagavan Antle.

"We have lions and tigers living together in large enclosures and at first we had no idea how well one of the lion boys was getting along with a tiger girl, then loo and behold we had a liger."

Marry a Girl of my Choice