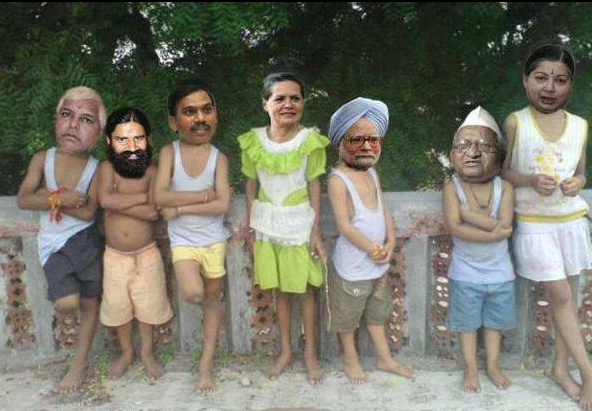 Laloo talks to his son, "I want you to marry a girl of my choice ".

Laloo : "But the girl is Ambani’s daughter."

Son : "Well, in that case..." Next Laloo approaches Ambani , "I have a husband for your daughter.

" Ambani: "But my daughter is too young to marry."

Laloo : "But this young man is a vice president of the World Bank."

Ambani: "Ah, in that case..." Finally Laloo goes to see the president of the World

Laloo : "I have a young man to be recommended as a vice president."

President : "But I already have more vice presidents than I need."

Laloo : "But this young man is Ambani’s son-in-law."

Mayawati came to Lallu's house with a goat.

The train goes through a tunnel and it gets completely dark.

Suddenly there is a kissing sound and then a slap! The train comes out of the

tunnel. The women and Manmohan are sitting there looking perplexed.

Bush is bent over holding his face, which is red from an apparent slap. All of them

remain diplomatic and nobody says anything.

Sonia is thinking: These Americans are all crazy after Aishwarya. Bush must have

tried to kiss her in the tunnel. Very proper that she slapped him.

Aishwarya is thinking: Bush must have tried to kiss me but kissed Sonia instead

Bush is thinking: Damn it. Manmohan must have tried to kiss Aishwarya. She might

have thought it was me and slapped me.

Manmohan is thinking: If this train goes through another tunnel I will make another