Home
Sports Jokes
A Game of Life and Death

A Game of Life and Death

A Game of Life and Death 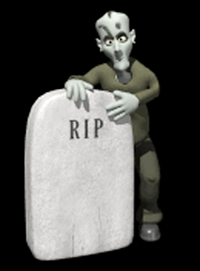 Bill Shankly, the late, legendary Liverpool FC manager reputedly said, 'Some people believe football is a matter of life and death. I'm very disappointed with that attitude. I can assure you it is much, much more important than that.' It appears that this fan thinks much the same:

An Italian football fan has started putting up a grave every time his team loses a major match. Inter Milan fan, Massimo Pecorino, 52, has so far erected more than 20 gravestones on a local mountainside. He says grave mistakes can only be marked by a grave where he buries his hopes and dreams, near his home town of Cortona.

Pecorino said, 'Instead of enjoying a celebration I felt like I was at a funeral, so I spent the day carving out my fury on a stone.'

The only CUP that matters in INDIA !